MESH Collective is an award-winning Agency for Social Change that has pioneered the field of digital, extracurricular youth education over the past decade.

MESH Collective is an award-winning educational initiative that has pioneered the field of digital, extracurricular youth education over the past decade.

MESH Collective provides socio-political education wherever access is lacking – to encourage young people to participate, offer orientation and empower them with knowledge and new perspectives. We build bridges between sciences, institutions, decision-makers and young civil society. We find creative solutions for new, digital dialogue spaces together with peers, high-reach creators and more than ten years of experience in targeting specific audiences.

We develop holistic communication strategies by analyzing our clients’ needs, digital presence and target groups. We identify where and how topics are being discussed online using data-based analysis and social media listening across platforms, channels and key opinion leaders. Through our approach, we create platform-specific and target group oriented creative concepts, entertaining social video series and multi-layered digital initiatives, along with offline events and press activities.

Our content is impact-driven and contributes to young peoples’ personal development and self-determination. We point out societal problems, but also ways to get involved and stimulate a personal rethinking and understanding of democracy. MESH Collective takes responsibility: We represent sustainability, equality, civil courage, inclusion and community spirit in all of our content and daily interactions. With journalistic expertise and an extensive network of experts, we and our partners responsibly drive social issues forward in an online world.

MESH Collective promotes civic dialogue inside and outside the digital space. Sociopolitical topics such as climate change, (digital) politics, democracy, science and research in the age of “fake news”, (cultural, sexual, religious) identity politics, discrimination and community building, social change and globalization, are all conveyed through popular genres.

MESH offers easy access to complex topics; it empowers and encourages reflection. It works to give teenagers and young adults a better understanding of social contexts and sets the course for them to develop a more active participation and critical opinions. 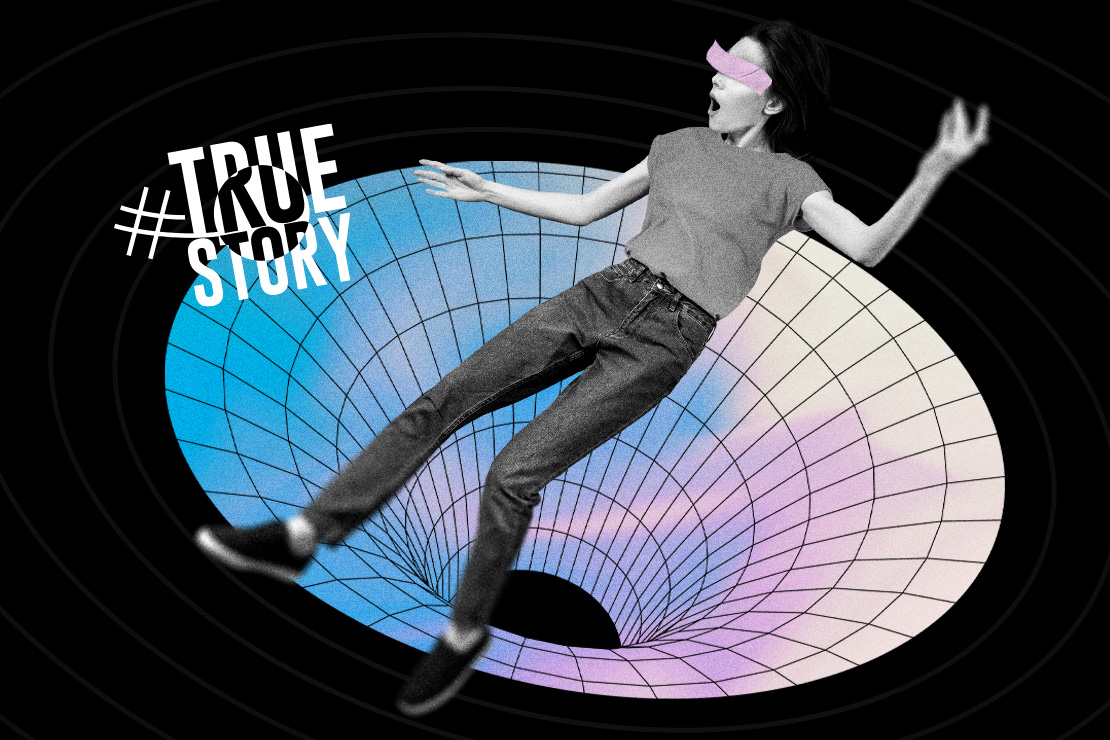 In times of social crisis, young people look for answers and find them where they spend a lot of time: in social networks. But which posts or people can I trust and where can I find reliable sources?

With the multi-stage educational campaign #TrueStory on how to deal with disinformation and fake news, which MESH Collective is realizing together with the Vodafone Foundation Germany as part of the Klickwinkel project, a low-threshold discourse was initiated across platforms and more than 2.2 million young people were reached.

Another part was an educational social video series in which the creators NikoTheC, Vikykid, the.real.lauri and Wailampublished TikTok sketches, challenges and an animated video on YouTube. In a humorous way and with stories thatencourage identification, they convey how one can recognize disinformation and take action against the spread of falseclaims

#TrueStory was completed with the six-part, fictional podcast Welcome to Fakeland, in which 16-year-old Beke tells her story of radicalization from a maelstrom of conspiracy myths and fake news. 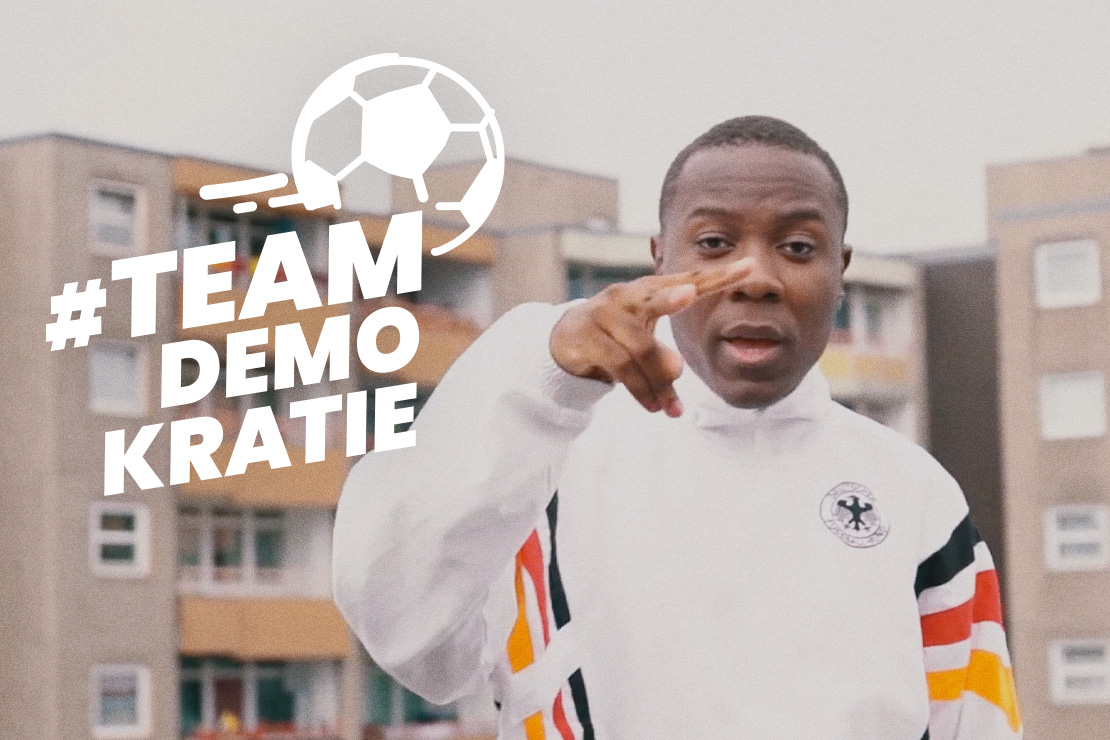 Democracy works through participation. Every vote is important for our democratic society. That is why the #Team Demokratie initiative has set itself the goal of raising young people's political awareness and promoting an understandingof democracy. In six social videos, young creators talk about socially relevant topics: social justice, equality, sustainability and the prevention of racism, hate speech and fake news. Featuring WhyNils on Instagram, fashion bloggersWilly & Vincent and Jeyisbaee together with Melissa Lee on YouTube, Xinting.Wang on TikTok and rapper MatondoCastlo with an emotional music video and song about his personal migration experience.

#Team Demokratie wants to offer young people a direct chance to be heard. That's why we conducted an online surveyamong young people during the publication period, asking them about their opinions and needs regarding current politics. The results are to be handed over to the new federal government and a picture of the mood is to be conveyed. #Team Demokratie is a cooperation with the educational project Lernort Stadion e.V. 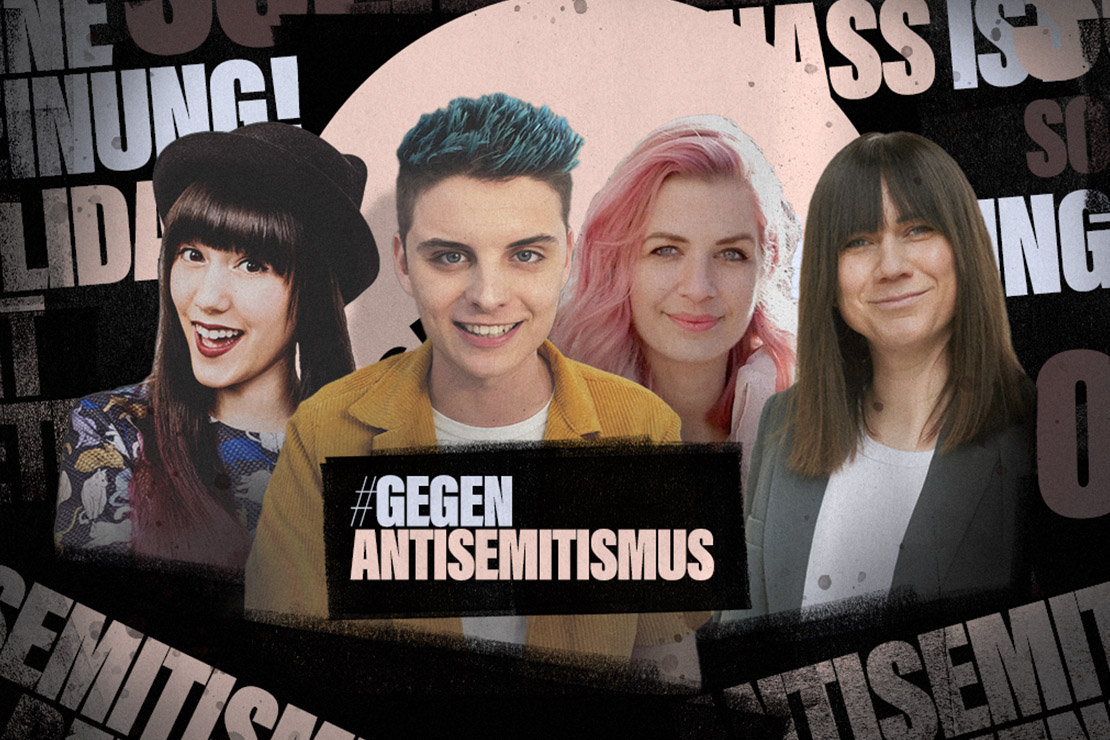 Germany has a huge problem: it is called antisemitism. 44% of Jews living in Germany experience harassment in form of hate speech - online and offline. In 2020, more antisemitic incidents were reported than ever before. Therefore our social web initiative #GegenAntisemitismus had four creators campaigning against antisemitism, talking to young Jews about Jewish life in Germany, breaking stereotypes and showing users how to stand up against antisemitism. The initiative was developed in cooperation with the American Jewish Committee Berlin (AJC) and MESH Collective and was funded by the Foundation "Erinnerung, Verantwortung und Zukunft " (EVZ).
‍
The initiative contained an IGTV with Louisa Dellert, who talks with the future rabbi Helene Shani Braun about feminism, sustainability and her faith, as well as a DIY YouTube video with Melissa Lee aka breedingunicorns, in which she bakes Rugelach with Jewish comedian Josh Telson and learns why he chose to stop telling certain jokes. In an IGTV by Susan Sideropoulos she exchanges perspectives with her friend author Linda Rachel Sabiers on being Jewish and shares some very personal insights regarding her family history. Fabian Grischkat, on the other hand, meets PhD student and activist Monty Avi Ott and talks to him about queer Jewish life and what experiences he has had wearing a kippah in Germany. 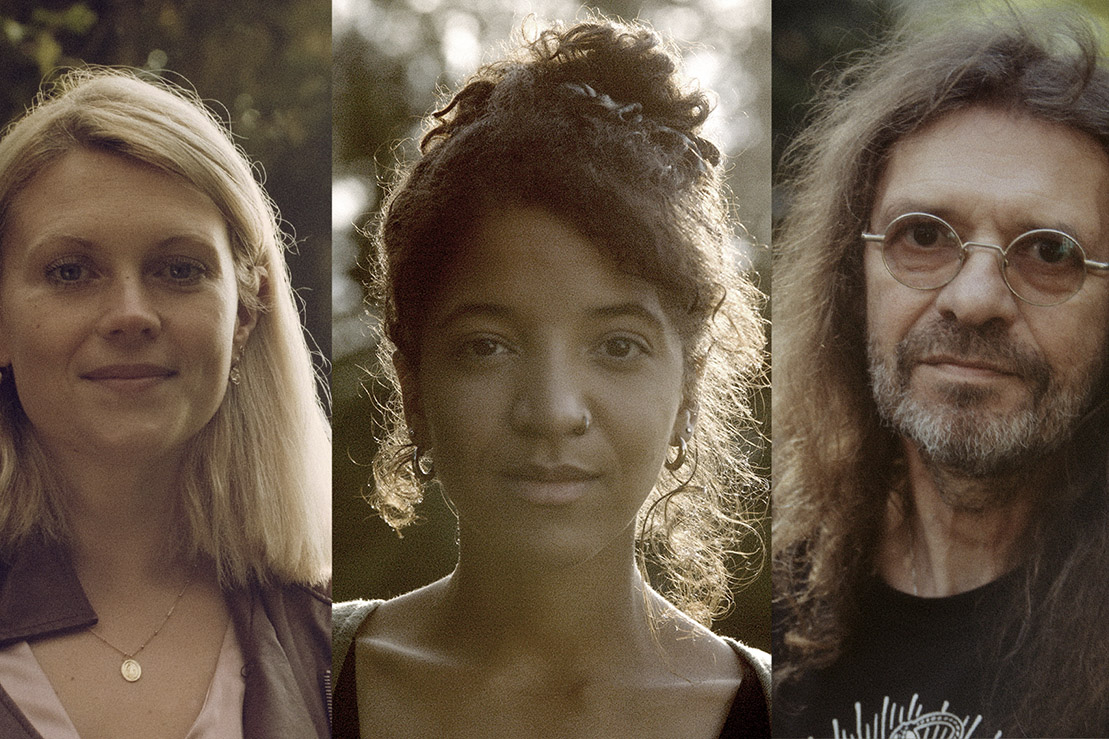 #MoreThanMS is a campaign initiated by the German Hertie Foundation. The main goal of the campaign is to create public awareness for multiple sclerosis, a diseasethat impacts 2.8 mio. people worldwide. Destigmatizing the representation of multiple sclerosis by the media, the initiative offers new perspectives on the so called "disease with 1000 faces". The message of #MoreThanMS is, that people with MS are more than their diagnosis and that their lives can be continued in individuality and self-determination. In cinematic music videos a diverse cast of three people with MS with varying states of the disease are being portrayed. Marie (29), Karolina (31) and Andreas (58) are #MoreThanMS. 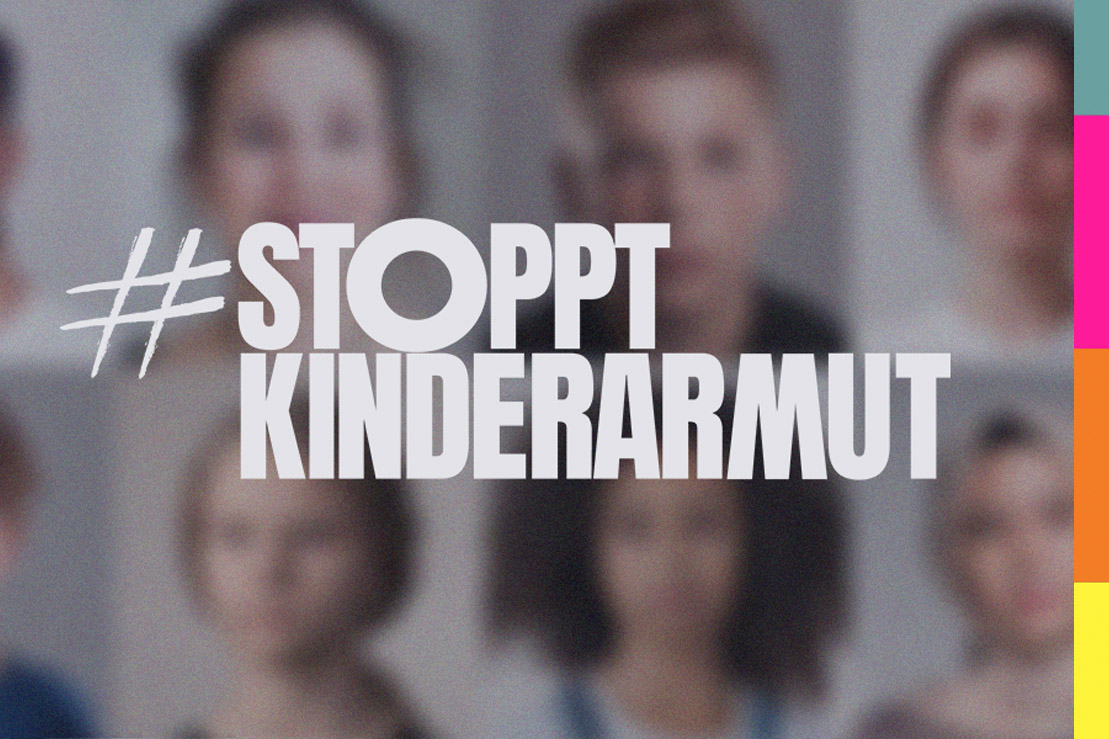 Every child living in poverty is one too many! Even in a rich country like Germany. And yet there are 2.8 million children and young people in Germany who are growing up in financial poverty. Even though they should all have the right to live as protected and carefree as possible. That is why the initiative #StopptKinderarmut (Stop Child Poverty), which we are working on together with the Bertelsmann Stiftung, is committed to combating child poverty in Germany.

An Open Letter Video is part of the multi-staged initiative, in which several German celebrities demand from politicians and society to finally take actions against child poverty in Germany. And with the Blackbox Monlogues, acutely affected youngsters get their say.
Additionally, five YouTube stars, who were themselves formerly affected by child poverty, talk about their own experiences on their YouTube channels. Amongst them are justCaan, Matondo Castlo, Kati Karenina, Anderson Rey and Leeroy Matata, who is interviewing a formerly affected peer.

More information can be found at 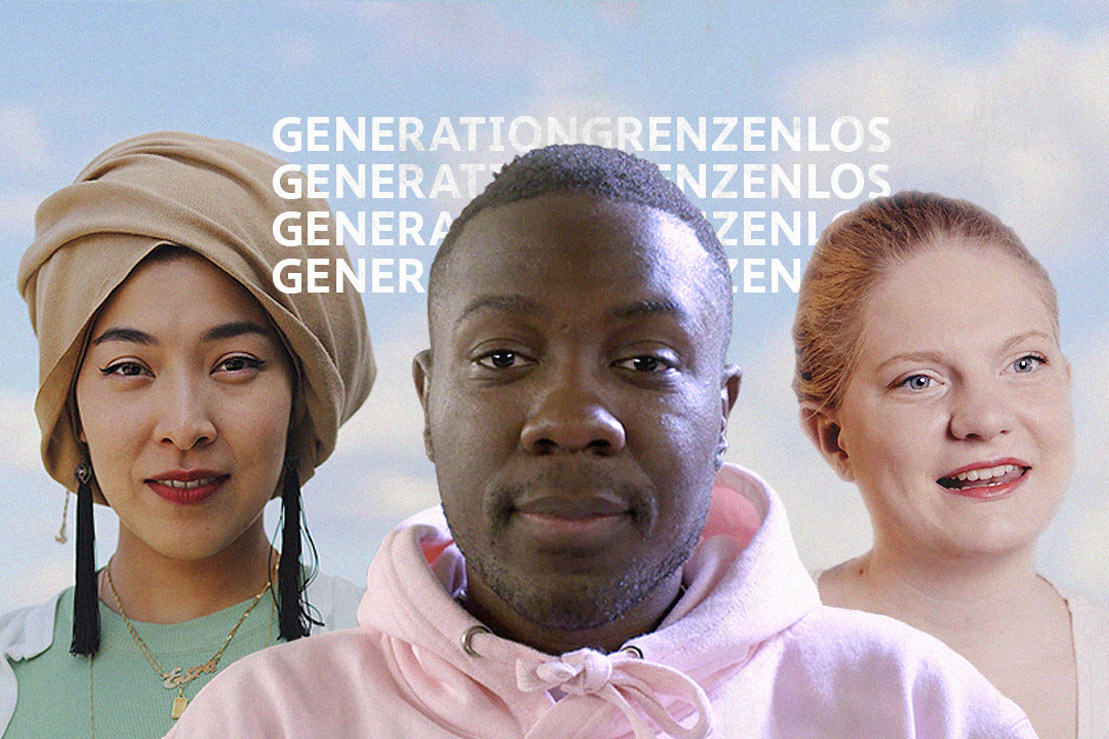 How can civic engagement be made more visible? For the non-profit Hertie Foundation, MESH Collective produces 30 portraits of young, committed people who work in a variety of ways for democratic cohesion and empathy. Whether in the fight against racism, as a woman in the voluntary fire brigade or founder of an own citizens‘ participation forum. The social media awareness campaign Generation Grenzenlos shows how much an individual can move and that each of us has the chance to actively shape our society. 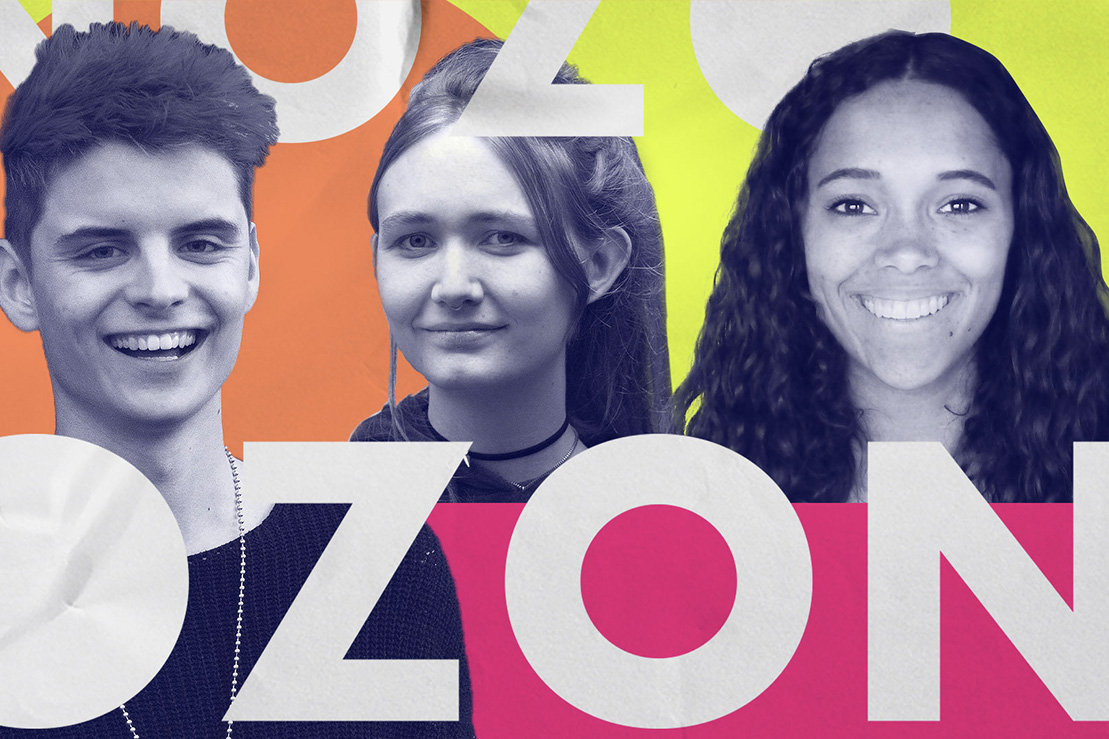 OZON is the first format in the funk universe that deals exclusively with environmental issues. Each week, one of our hosts explores one specific question, which we approach from multiple angles: using hard facts, practical everyday tips and community challenges. We draw connections between global environmental issues, like microplastics in seas, and the daily decisions that we all make. OZON was created and is produced in collaboration with UFA X. 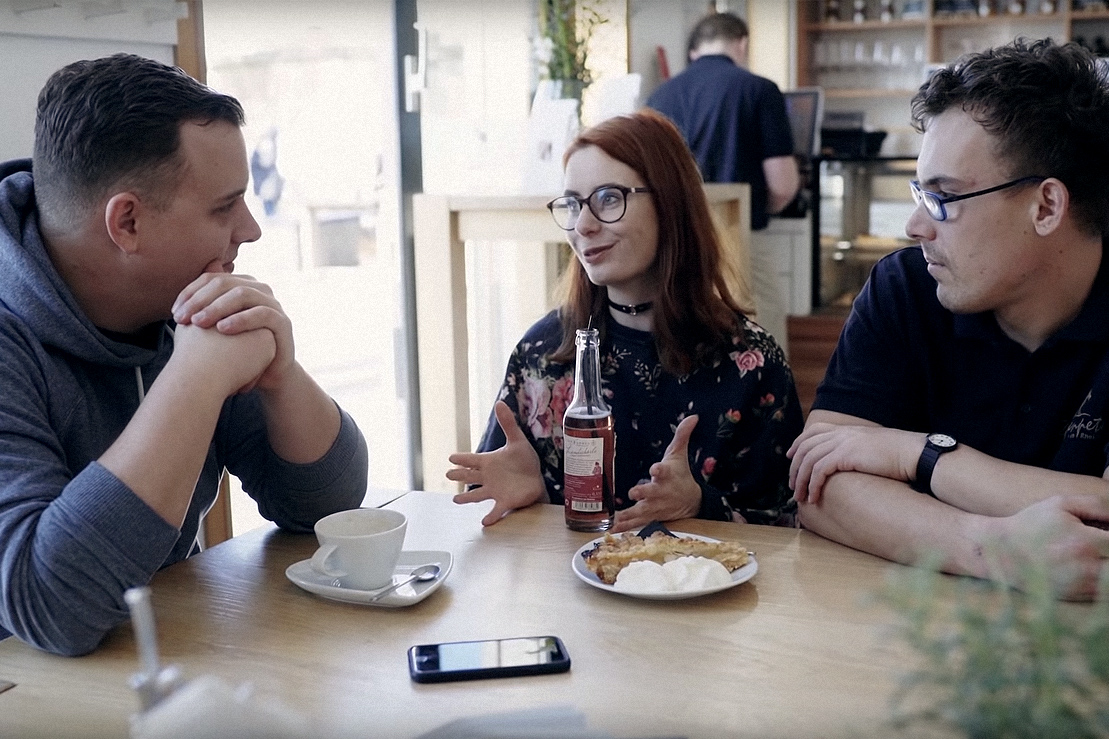 On Instagram and YouTube, the Pausentaste campaign offers different creators the opportunity to engage with the daily reality of about 480.000 teenagers in Germany, who have to take care of close family members due to a debilitating disease or disability. Malwanne, Einfach Inka, Fräulein Chaos and Fabian Grischkat share their own, very personal experiences and remove the taboos from a topic that is hard to manage even with support.Pausentaste is an initiative by the Ministry for Family Affairs (BMFSFJ). 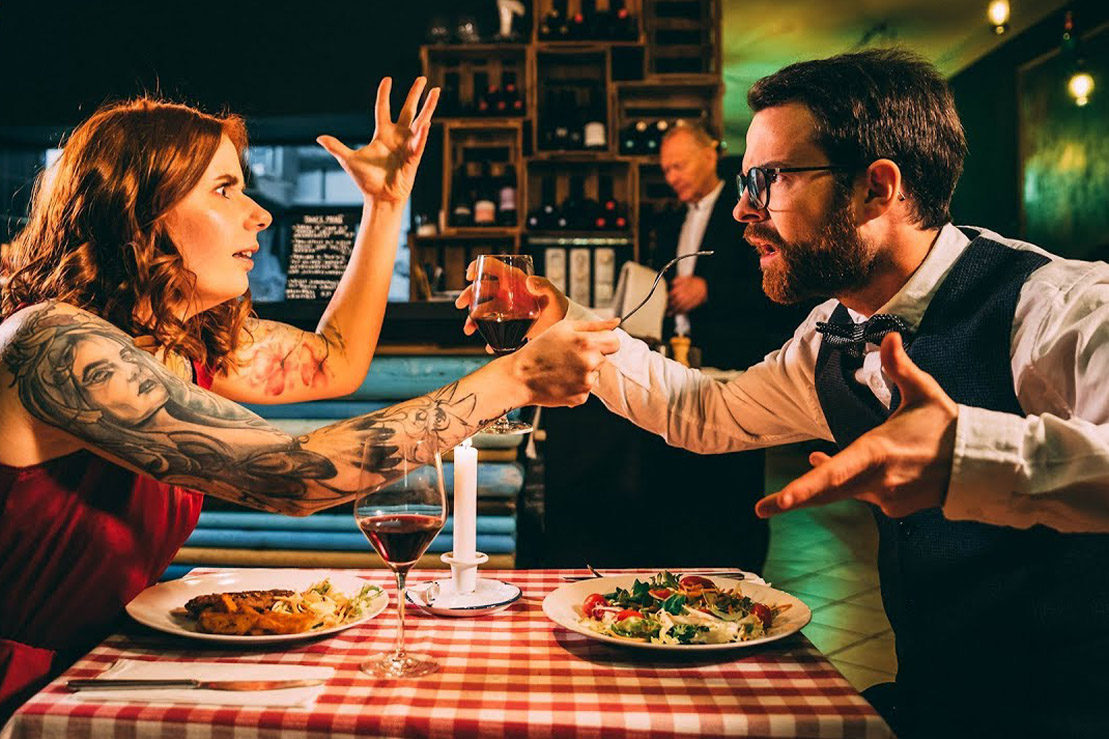 Together with WWF Germany, MESH Collective is producing a nine-part series to mark the annual Earth Overshoot Day. Currently, mankind consumes significantly more resources than the earth can reproduce within a year. The Earth Overshoot Day signifies the date, onwards from which we start using more from nature than we can repay. But what exactly does it mean to live within the boundaries of what nature can supply? What are the key factors driving climate change and what role do our personal actions play? 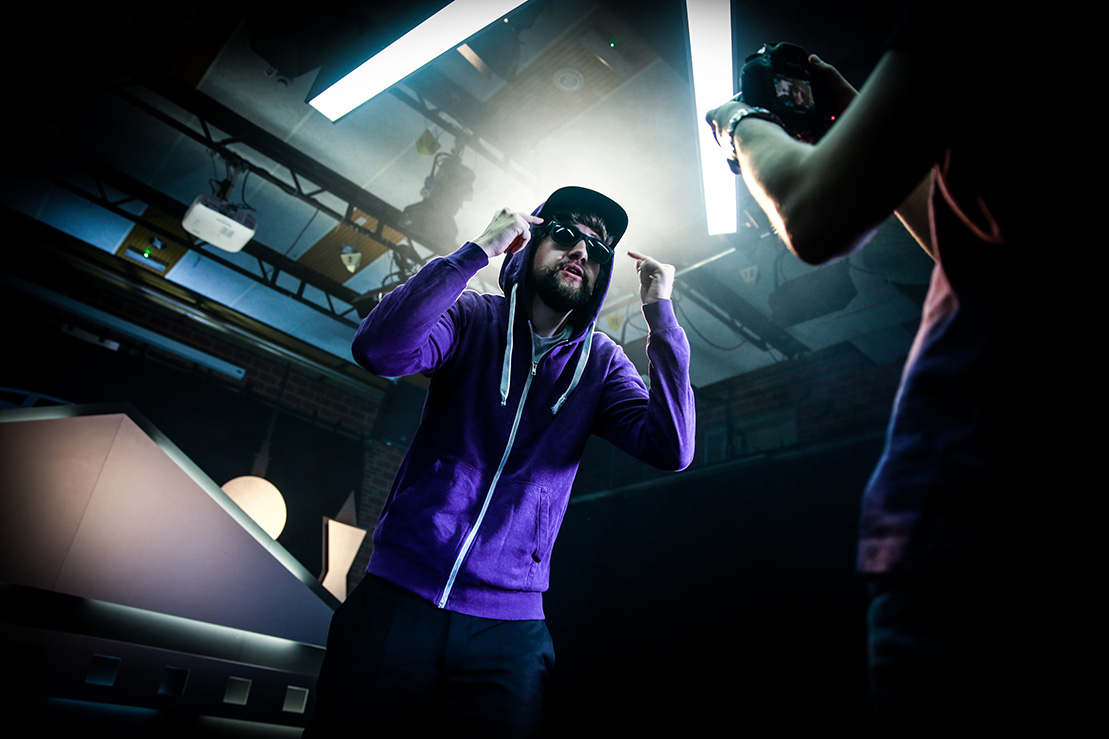 Various YouTube stars engage with populism. What do we mean when we use this “buzzword”? Why is populism so dangerous? How do you expose and counter populist content? The phenomenon of populism is illuminated historically and stereotypical prejudices, which are abused for populist means, are put into context and refuted with facts. The videos appear on the channels of YouTuber stars RobBubble, I’mJette, Fräulein Chaos, EsKay, Tense and ItsColeslaw. 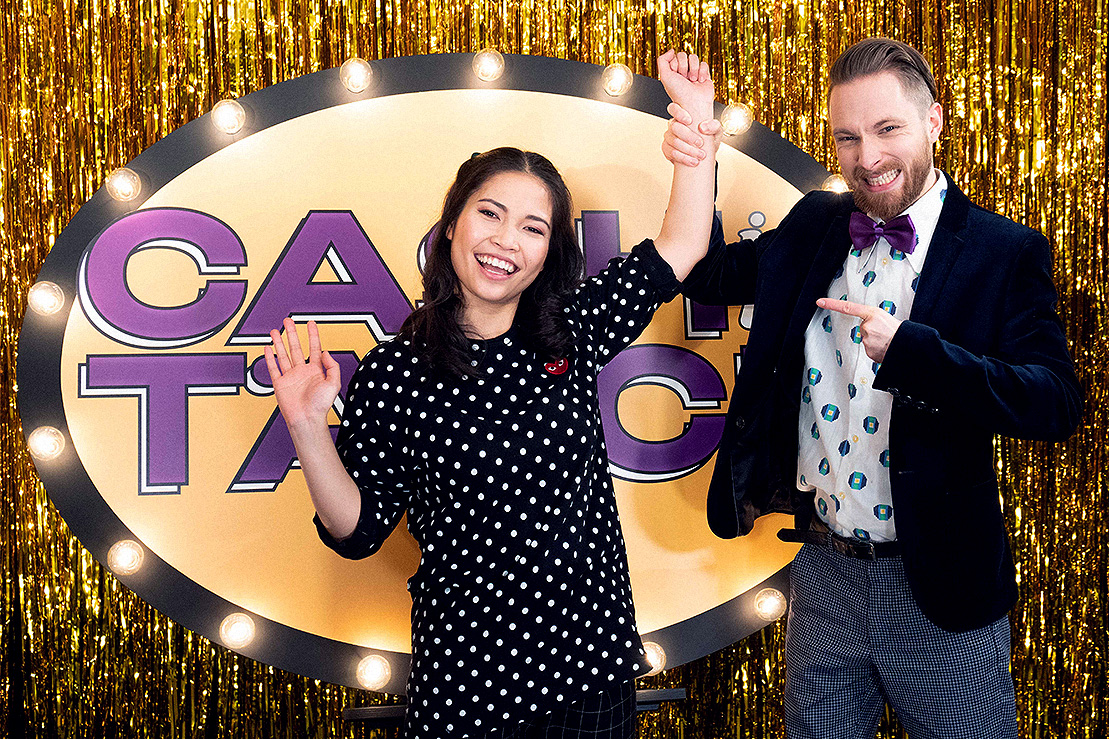 CASH IN THE TÄSCH

Cash in the Täsch is the first economy quiz on YouTube Germany. Over the course of eight episodes, channel host Pocket Hazel competes against the YouTuber stars MrTrashpack, RobBubble, breedingunicorns, NiksDa, Techtastisch, Sola, Maxim and Wailam. She’s playing for her claim to the »Superbrain« title and some donation money for a charity project. Joyce Ilg and NiksDa also appear in their roles as “the boss” and economy rapper, respectively. 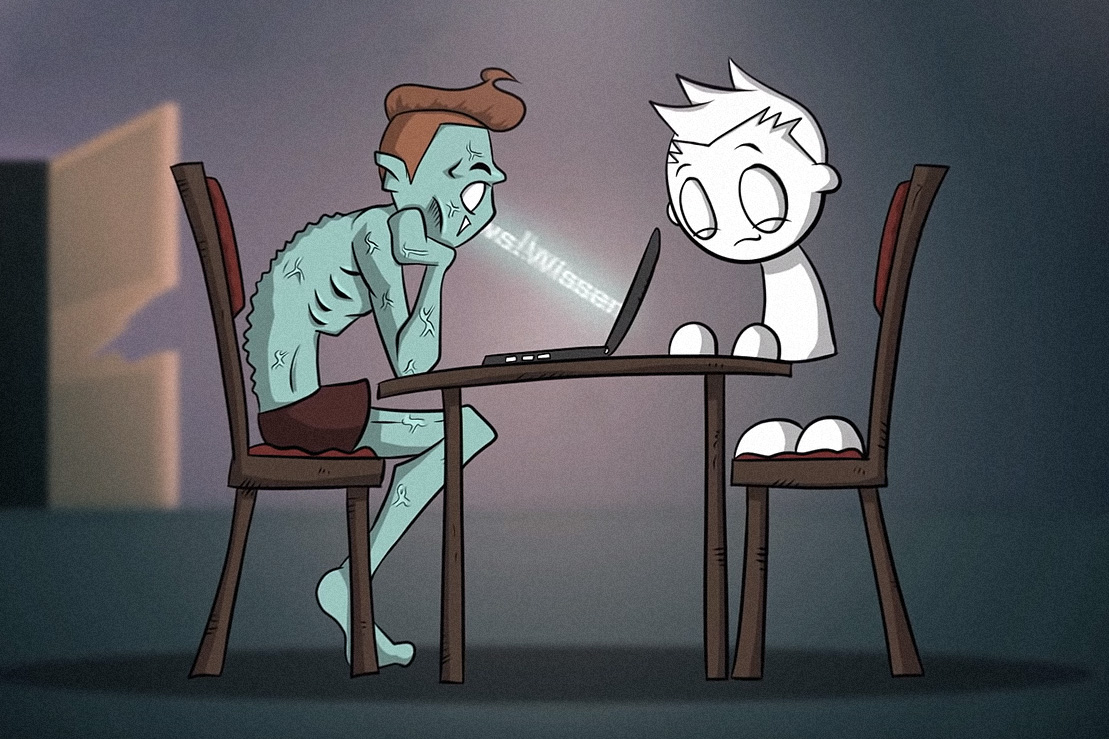 BrainFed is one of two news formats developed by MESH Collective and produced for the Federal Agency for Civic Education over the course of multiple seasons. BrainFed is told in fast and vivid images – it was the first animated news format on the German YouTube scene. BrainFed was awarded with the Grimme Online Audience Award, the Educational Interactive Award and the Politics Award. 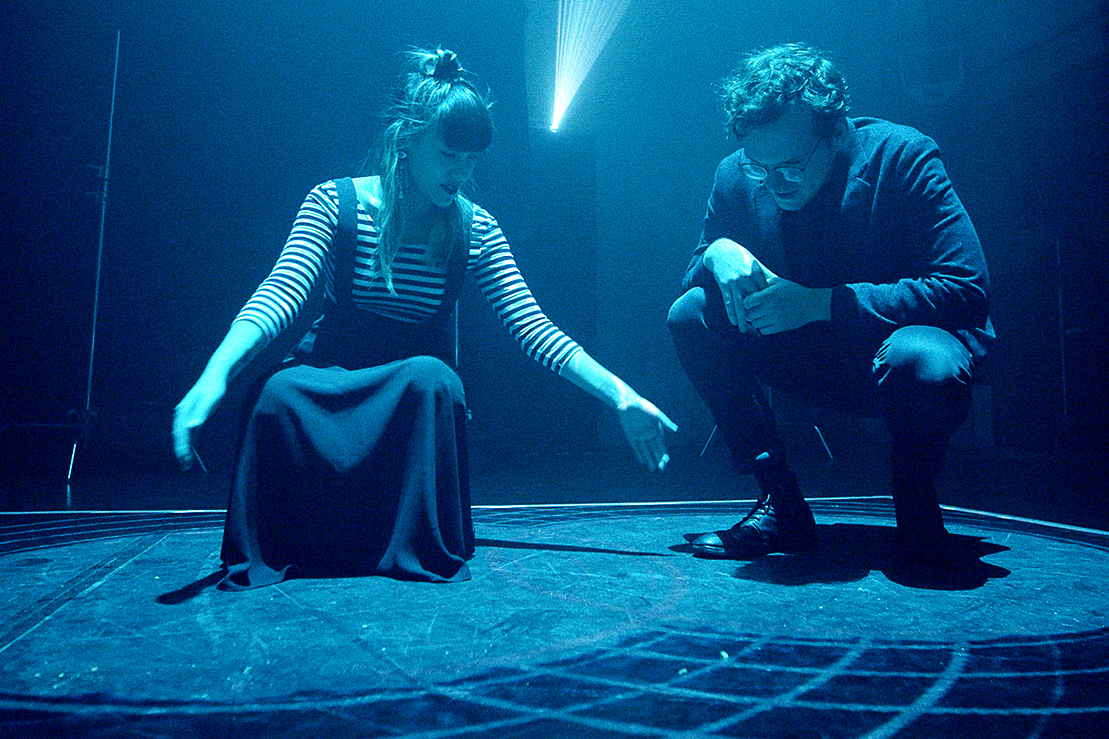 What does human dignity actually stand for? If you ask people, nearly everyone will quote the German constitution: "Human dignity is inviolable.” But what exactly do we mean by dignity? In celebration of the 70th anniversary of the German Basic Law, the initiative Deine Würde aims to bring the abstract concept of dignity to life in various phases. A social video on Facebook and YouTube creates an emotional access point into the topic and raises awareness for the importance of dignity for our daily co-existence. The immersive play HUMARITHM deals with dignity in the age of artificial intelligence. Meanwhile, various creators also address the topic of dignity on their own channels.

Anyone who has a question or would like to work with us, is welcome to contact us.